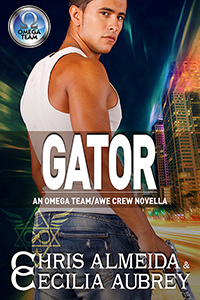 He gave her up once…

Gabriel “Gator” Moreno arrives in Florida ready to face his past, exorcise his demons and settle an old debt. To kill three birds with one stone, he has pledged to keep Alysa Cortez, his old friend’s sister and the woman who owns his heart, safe from the gang hunting her. What he isn’t ready for is the revulsion he finds in Alysa’s eyes when she sees him at her doorstep.

She loved him once…

Alysa Cortez never expected to see Gabriel in his old stomping grounds six years after he hightailed out of Tampa and straight into the arms of Uncle Sam. Neither did she expect the burn of betrayal to morph back into desire when she came face-to-face with the new law-abiding, hard-muscled and hot-as-hell soldier. When her brother’s legacy sinks its claws into her, she must put her trust in the one man who’s already broken her heart once—and is bound to do it again.

NOTE: This story is a tie in between Desiree Holt's Omega Team World and the AWE Crew Series. While the setting of the story is Desiree's Omega Team's stomping grounds and the Crew men are not fully in the picture in this book, one known Crew character, who made his debut in Alternate Connection, plays an important part in GATOR's story. Gabriel and Alysa will make regular cameo appearances in future Crew books.