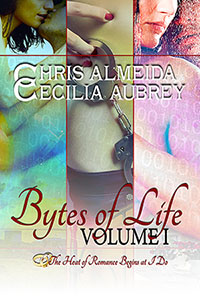 Countermeasure: Bytes of Life Volume I

ECSTASY BY THE SEA

The second story in the steamy spinoff to the COUNTERMEASURE series sees Trevor Bauer and Cassandra James having just tied the knot and moving across the pond to their new digs in Ireland to begin their life as a married couple.
Unbeknownst to Cassandra, Trevor plans the perfect honeymoon getaway down to the daintiest swatch of lace. His detail-obsessed wife won't know what hit her when he sweeps her away for what will result in nothing less than a weekend filled with pure ecstasy by the sea....

In the third short story in the COUNTERMEASURE: Bytes of Life series, Trevor and Cassandra Bauer's romance continues to burn even after a near death, their wedding, working cases for the NSA, and their own personal investigation into the disappearance of Trevor's parents.
Trevor's birthday is on the horizon and Cassandra is beating her head against the keyboard trying to find the right gift. Inspiration finally hits in the form of a house-warming gift from a friend. Little does Trevor know what surprise awaits him at the stroke of midnight....

In the fourth Countermeasure: Byte of Life, Trevor and Cassandra Bauer have settled into married life after facing the bumpy road to the altar. While Cassandra looks for ways to spice up their love life, Trevor questions his efficacy as a husband. His insecurities are compounded by the constant threat of Nathan Nelson, her old friend and past lover, who can't accept their marriage as final.
A brand new marriage, personal uncertainties, and a good dose of alpha geek jealousy make for a volatile mix. When a phone call spurs him to lay claim to what is his and give Cassandra the fantasies she craves, Trevor reacts like any hot blooded man would. The result is a steamy room, slippery bodies, and Passion at Dawn.