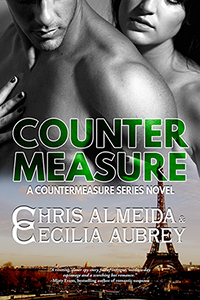 Wow. I’m not kidding when I say that time flies when you’re having fun. I just realized that Countermeasure was released a little over two years ago.

January 12th, 2012 was a big day for us. Not only because we were releasing our first novel but also because we were taking the big step of going indie. And, as with most new indie authors, we were cutting the costs of production by tackling every single possible aspect of publishing we could.

We followed all of the “indie publishing done right” rules for the things we couldn't do ourselves. We outsourced the print layout and we partnered with an amazing editor, but when it got to cover design, since I had a background in graphic design for web and print, I took that particular task into my own hands.

The ability to approve and/or modify covers at will is one of the great aspects of indie publishing and having the graphic design training under my belt gave us an advantage but there’s more to cover design than meets the eye. I hadn’t realized how hard the business of cover design really was until I had tackled it myself. There's so much more to it than the technical side of layering images, blending, applying levels and such. It also involves matching the feel of the cover to the actual content of the book. There's that "one picture says all" aspect that needs to be reached.

Although I am as comfortable with the graphic design aspect of the work as with branding guidelines, I had no clue how tough it would become to apply all of those skills into creating covers that not only entice the readers to pick up the books but are also unique while matching other covers in the same genre and category.

Some of the lessons came slowly over the two years as we attended workshops conducted by successful authors like Elizabeth Naughton and Deborah Cooke. With each lesson and advice, we made adjustments to the front and back matter content as well as the covers.

We learned about the importance of having a cover that can be read even as a thumbnail, that shows the book contains not only heat but also suspense. We learned about how it is important to link books in the same series by maintaining a common identifier among them.

As we put that knowledge into play, our covers evolved. However, three key branding elements remained unchanged since the inception of the very first cover and across the other covers in the series--the position of the boundary lines at the top and bottom of the covers, the binary code layer in between them, and the font used for the titles on every cover in the Countermeasure Series.

The positioning of our names, font used for our new logo, and the other elements on the covers have been adjusted as the covers morphed into the current version. Since the publishing of our latest title, we've changed the covers a couple more times and may still make changes to the Bytes of Life covers to match the covers of the novels in the series more closely before the next novel is released.

All in all, we understand that the purpose of the cover is to catch the readers' eyes, especially in an overcrowded market like ours, and if we feel the cover is not doing what it is intended to do, we have the freedom to keep trying until we reach that sweet spot.
Here's the graphic evolution of Countermeasure's cover from the first version to what it is now.

What are your thoughts on covers? How does a cover affect your decision of reading a book?
Thank you for joining us in our little trip down cover memory lane. :)