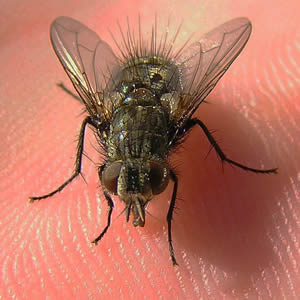 I’ve been battling an enemy. It has made my writing life a horrendous mess with its suicidal attacks and annoying buzzing. Yes, I am talking about a fly. A fly.

For the past three days, I have tried gentle coaxing to make it leave and enticed it to abandon the premises by leaving doors open in a cold day. That sensible behavior has now deteriorated into murder threats and, sliding even further, it has driven me into becoming a raging lunatic waving kitchen cloths and rolled newspapers, all to no avail. The enemy remains within my home.

The worst part of this absurd animosity is that it—I refuse to acknowledge it as he or she. That’s going too far—seems to have a higher IQ than it’s commonly attributed to insects. I swear it knows when I am getting ready to write. It has observed and kept tabs on my daily routine like a private eye watches the cheating spouse for a money shot.

Every morning for the last three bloody days, as I get my usual cup of tea and toast and proceed to sit in what I call my nest—a recliner in the sitting room precisely positioned to give me access to a place to set my breakfast, the mouse and an ottoman—I feel the weight of its stare on my back while the creepy Birds soundtrack plays in my head.

This morning was no different. I got ready to write, put on my usual couple of layers (I can’t write when I am cold) which gives me a comfortable womb-like feeling. Life was perfect when I leaned back and dove into work after turning on the music for the right mood.

Seconds later, the kamikaze fly darted into my nose as if looking for a spelunking adventure. Sputtering and shooing it away, I scrambled on the seat, looking around, trying to locate it and found it parked on the blinds across from the chair, rubbing its legs together like a maniacal villain. I could almost hear the “mwahaha!” echoing from where it stood in a standoff stance.

At that stage in the writing process, going after tools to kill it became a struggle of will. Getting up meant leaving breakfast cooling down, the comfort of the nest, to become the raging lunatic all over again. I sat back and hoped it’s done with its crazy attacks for the day. When I’m lucky it hides for a while, leaving me alone to write. I’m fairly certain it’s only planning its next attack. And as expected, I was dead wrong.

It kept coming back, circling above my head only high enough I couldn’t smack it with one of my craft books. It did stop-and-gos to tease me, landing on my head countless times until I looked like a flailing idiot. It also tried to steal my breakfast and that in itself meant I couldn’t fully immerse into the character’s psyche while enjoying my strong and sweet tea. I had to stop any possible creative process to defend my buttered toast from a six-legged thief by balancing the tea cup right in the middle of the plate cradled in my arms. At that moment, anybody looking at me would have found a strong semblance to Gollum. Only, instead of the ring, I was doing the “my precious” to fast-sogging toast and a cup of cold tea.

Once breakfast was inhaled without any major attacks, I felt safe to return to my work but, again, it played games. It came out of nowhere, bombed me repetitively until I gave up and, feeling like a persona non grata in my own home, left the premises to the invader.

I’m considering taking that route for the next few days, after all, I am the least confrontational person you’ll ever know. In the end, I’ll possibly benefit from the change in environment and not diving for cover from flash dive bombings. Besides, although the fly is a mighty strategist, I have one thing on it. My life span is longer than fifteen days. I’m patient. I can wait.