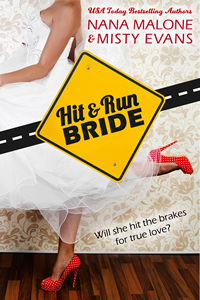 We have the pleasuse of hosting another of Misty Evans' releases, this time in partnership with Nana Malone. It seems to be another hit by both best selling authors. :)

Hit & Run Bride was released on June 2nd and if you haven't picked up your copy, we recommend you run and get yours NOW.

Marketing analyst Becca Daniels has a life that looks good on paper - a coveted promotion in an exciting new city and a successful, handsome fiancé. But with her Hawaiian honeymoon fast approaching, she has to face her biggest fear...water. She can't swim. On her way to her first swimming lesson, however, she veers left instead of right and nearly runs over her hot, new instructor.

Liam Caldwell has put his life on hold to look after his sick mother. The last thing he needs is the hit-and-run brunette who ruined his motorcycle disrupting the adult swim class. But from the first lesson, he realizes there's more to the curvy, smart-mouthed Becca than meets the eye, and no matter what he does, he can't resist her luscious lips and her driving determination.

With each lesson, Becca discovers that what looks good on paper isn't making her happy. Should she play it safe in the shallow end with her career and fiancé? Or should she dive into deep waters with a man who offers passion and freedom like she's never imagined? 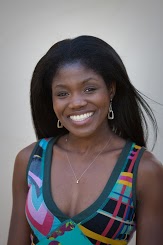 USA Today Bestselling Author Nana Malone’s love of all things romance and adventure started with a tattered romantic suspense she borrowed from her cousin on a sultry summer afternoon in Ghana at a precocious thirteen. She’s been in love with kick butt heroines ever since.

With her overactive imagination, and channeling her inner Buffy, it was only a matter a time before she started creating her own characters. Waiting for her chance at a job as a ninja assassin, Nana meantime works out her drama, passion, and sass with fictional characters every bit as sassy and kick butt as she thinks she is.

Nana is the author of twenty novels. And the books in her series have been on multiple Amazon Kindle and Barnes & Noble bestseller lists as well as the iTunes Breakout Books list and most notably the USA Today Bestseller list. 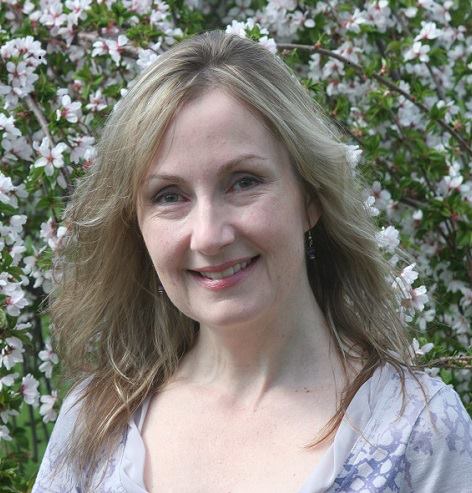 Becca stared in shock as she struggled to regulate her breathing. No. Not him. He could not be her instructor. He could not—her brain stuttered as her gaze drifted past his surprised, clearly annoyed—although attractive—face.

Oh wow. Holy shoulders. The Tribots at work weren't kidding when they talked about swimmers’ shoulders. He had a broad chest to match equally impressive abs worth staring at. He looked exactly like the kind of guy who did triathlons. Perfect. Her swim instructor was a totally hot Tribot. Shoot her now.

No. She wouldn't freak out. She had a task to complete. An assignment. Learn to swim. She could do this. All she had to do was ignore Mr. Shoulders and Abs. Oh yeah, and get in the water.

Her heart rate ticked up, and she swallowed hard. Stay calm, Becs. Focus on the things you can control. And twenty-three-year-old Becca was in a hell of a lot more control than seven-year-old, learning-to-swim Becca.

She shook her head. She was an adult, damn it. It was just a little water. She forced a smile onto her face and dragged her unwilling eyes back to Mr. Couldn’t Drive’s face. “Sorry. I’m late.”

He stared at her long and hard, and Becca shifted from foot to foot. She resisted the urge to tug on her bathing suit. There was no hiding her boobs in this thing. Or her ass, for that matter. She’d looked for her Armani racerback for nearly thirty minutes this morning, but all she’d been able to find was her beach bathing suit. With its double ties at the straps and the low cut of the bottoms, it was made for sunning and getting attention, not actual swimming. Of course, the lack of fabric had never bothered her before because she’d never planned on being in the water.

Finally, he shook his head. “Please join the rest of the class.”

“Right. Sorry again.” She scuttled over to join her new classmates gathered on the concrete near the shallow end. They looked like a herd of baby cattle off to a too-early slaughter. Only one brave soul, a rail-thin woman who was more limbs than body, had the courage to smile at her. Everyone else just stared at the water, looking terrified.

Stay calm. Stay calm. It’s only water. She repeated her new mantra to herself over and over again.

“As I was saying, I’m your instructor, Liam. Today, we’re going to start with the basics. I don’t want you to worry. I’m here to help you. We’re in this together.” He smiled.

Becca blinked. Yeah well, he should certainly not be allowed to do that in public. If he’d smiled at her in the parking lot, she would have been less annoyed.

He continued. “Can I get a show of hands for anyone who’s never been in a pool before? It seems like a silly question, but I’ve learned it’s a good one to ask.”

Everyone slid covert glances around. No one dared actually turn their heads and look. Becca did not raise her hand. She’d been in a pool. Like on those floating chair thingies. And maybe if she were feeling brave, she’d stood knee-deep in the shallow end. No need to embarrass herself, especially since no one else raised a hand.

Liam nodded. “Okay, good. I’m going to ask each of you to follow me into the shallow end then. Feel free to hold onto the sides. We’re going to do some introductions and get to know each other a little bit before we get started.”

A few brave souls sitting on the edge of the pool plopped right in with tiny little splashes that spritzed their neighbors’ legs and torsos. Most of the class opted for the relative safety of the stairs.

Becca shivered despite the warmth of the room. She knew that they kept the pool at a balmy ninety-three degrees, which was the reason she’d chosen this pool as opposed to the one closer to her place in Golden Hill. It didn’t take her long to realize that she was the only one still standing on the sidelines.

Brittle, determined smile in place, she forced one foot in front of the other until she was at the edge of the stairs. The woman who’d smiled at her before gave her an encouraging nod.

And Liam, damn him, waited patiently for her to join her classmates.

She gripped the railing and took a tentative step in. Oh wow, that was nice. Just like a bath. The water lapped gently at her skin, and she gripped the rails even tighter. Another step. Shin level. Great. She was really going somewhere now.

Everyone was waiting on her; she had to do this. It was either this or tell Holden that she couldn’t swim. And she was not doing that. She had the perfect guy with the perfect honeymoon planned. And the perfect job. If she didn’t do this, everyone would know eventually. With another deep breath, she took another step. Knee-deep. Yay! Except, she was expected to go farther.

Liam half swam, half walked through the water to get to her. “It’s okay.” His smile was softer, and his voice was low, soothing, as if they were the only two people in the pool. “What’s your name?”

Name, what was her damn name? Her energy was so focused on not letting go of the railing and not drowning that she’d forgotten her damn name. Deep breath. “Uhm, it’s Becca.”

“Nice to meet you, Becca. Now why don’t you give me your hand? I’ll help you the rest of the way in.”

“N-no. That’s okay. I think maybe I can learn from here.”

There were a few snickers from her classmates. Liam ignored them and lowered his voice even further. “Have you been in a pool before, Becca?”

Well, maybe she shouldn’t have lied about that part. “Yes. But usually with a floating chair or something.”

He nodded. “Okay, no problem. Focus on my voice. We’ll get you into the water together.”

She glanced around at her classmates. Some of them looked impatient. A few looked encouraging. But the vast majority were focused on clutching onto the side of the pool, oblivious to her torture. “I—maybe I can’t do this. Can I just watch?”

Liam chuckled. “You’ve already been brave enough to come this far. Let’s see what happens if you trust me. You have nothing to lose by trying.”

“You mean besides my life?”

She could tell he was trying to contain a smile as his lips twitched. “Now how would that make me look if I lost a student on the first night? I have my reputation to protect.”

This time, Becca did smile. Slowly, she let go of the rail with her left even as she gripped tighter with her right. She slid her hand into his warm and firm one and he held her tight as if he’d never let her go. “D-do you have me?”

“Look at me, Becca. Focus on me. Nothing else matters right now, except you and me.”

She nodded. His voice really was soothing, washing over her like warm rain. She focused on his eyes. The deep blue color mesmerized her, and she took another step in. Water lapped at her upper thighs.

With a little more coaxing, and a lot more focusing on Liam, her feet hit the bottom of the shallow end. Holy shit. The water lapped at her waist, and there was no shock of cold making her panic. This wasn’t so bad.

She grinned up at Liam, and he smiled in return. His eyes narrowed slightly, and his gaze fell to her lips. Warmth bloomed from her chest and—a wave suddenly hit her in the back, nearly knocking her off her feet. She squealed and wrapped herself around Liam, octopus style, unwilling and unable to let go.

Liam held her tight as she squeezed her eyes shut. She heard him say, “First rule of the pool, no deliberate splashing of the other students. Do you understand me?”

His voice was stern and a little intimidating. The warm, lazy, mellow quality had vanished. From behind her, a male voice muttered a weak apology.

With her arms and legs wrapped around Liam, Becca hid her face, letting his strong body carry her to the side. “You can let go now. You’re safe.”

Becca blinked. A small, kitten-like whimper issued from the back of her throat. From over her shoulder, she saw all her classmates watching her with curiosity. Okay, maybe she’d overreacted. But did she really have to let go? Because it seemed so much safer with him holding her. What are you going to do, take Liam on your honeymoon? Her whole body flushed, and she reached out for the ledge. Only when she felt the cool concrete under her fingertips did she unwrap herself from her instructor.

Musings from an Addicted Reader 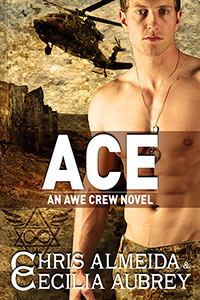