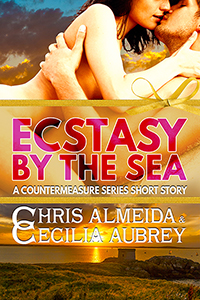 Amazon
iBooks
B&N
Kobo
Google Play
Also available in digital and print as part of the COUNTERMEASURE: BYTES OF LIFE VOLUME I anthology.

Ecstasy by the Sea

This steamy spinoff to COUNTERMEASURE sees Trevor Bauer and Cassandra James having just tied the knot and moving across the pond to their new digs in Ireland to begin their life as a married couple. Their days have been swamped with planning the wedding, setting up their new business, and Trevor's NSA commitments—not to mention their continued investigation into his parents' disappearance. So when it’s pointed out to him that a key launching point for a new marriage has been overlooked, Trevor takes matters into his own hands.

Unbeknownst to Cassandra, Trevor plans the perfect honeymoon getaway down to the daintiest swatch of lace. His detail-obsessed wife won't know what hit her when he sweeps her away for what will result in nothing less than a weekend filled with pure ecstasy by the sea....