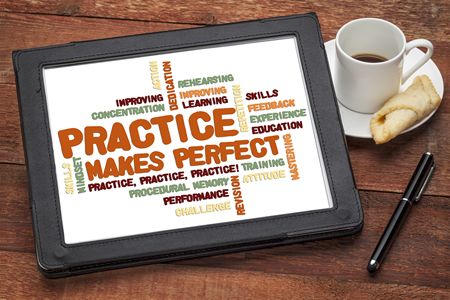 I drew a big blank today. Not while writing, but while talking to my mother. You see, I’ve lived in Canada for over 15 years and interact in English via written or spoken form daily, for an average of eighteen hours every day. As much as my mother and I are in constant contact, the number of hours we actually talk each month pales in comparison to the time I spend with Cecilia on the phone every single day. As strange as it may sound, the constant contact piece is what led to my blank today which in turn has a connection to my writing habits. It’s a long winding road, but I’ll get there. Bear with me.

Before I moved to Canada, I taught my mother to use the internet so we could keep in touch without the need to sell any first, second or third born to pay the phone bill. She took to it like a fish to water. That in itself was and continues to be a very scary thing.

Within months of learning about all the internet had to offer, I would hear her accounts of the groups she had joined, the people she had met, and how much fun it was. I had a panic attack the day she mentioned she was meeting a few of them for tea one day. At that point, I had to sit down and have the “don’t talk to strangers” talk. Not that it made any difference in how she continued to use the net.

Like a true Northeaster Brazilian, she makes friends easy, she is loud, happy-go-lucky, and enjoys a good gathering. Those are great traits if they didn’t involve meeting people you have only met online once on a forum. But I digress. The thing is, I’m always in fear that I’ll get a call from police telling me some punk robbed her blind or worse. And being that she’s always sending me dozens of emails—most of them NSFW—every single day, when I get none for days or she doesn’t reply to an email from me with the subject line: “Are you alive?” I get worried.

Today, after not hearing from her for many days, I caved and called her on the phone. She picked up after the first ring and sounded in very good spirits. At that point, I began to breathe a little easier. She was surprised to hear from me and, as usual, drilled me about my health, my eating habits, work and such. I gave all the appropriate answers. She then asked me why I called. That’s when I explained humorously that I hadn’t received any of her inappropriate emails for a few days and was a bit worried. She was puzzled. “What inappropriate emails?”

I began listing all of the emails I’d received in the past that should have arrived with a “Nao abra no trabalho!” (Portuguese for Not Safe For Work) warning in big letters. And as I was telling about a particular email that had a very safe subject line but as I scrolled down the page…that’s where the blank hit me.

I couldn’t figure out what “scroll” was in Portuguese. I stopped. Thought about it. Still couldn’t find the right word. I ended up taking several minutes to explain what had happened with the darn email, where I’d opened it, and my very swift reaction to seeing it on my screen. I couldn’t quite paint the whole picture of my panicked reaction nor use the profanity used in my mutterings back then as I tried to close the windows before any co-workers or my boss saw the images. In the end, she had a good laugh about the email story without even noticing I’d drawn a blank on such a simple word.

I hung up a while later and still couldn’t figure out the correct translation. So, taking a cue from a TV game show, I called a friend who gave me the word I was looking for, but not before he had a very good laugh at my expense (thanks, man).

Just like with any skill, language—even the one you learned as your first language—is retained on a ‘use it or lose it’ basis. The same goes with writing. The more you do it, the more it becomes second nature. Even when your creative juices are not flowing quite right, you should just write about anything that hits you. Even a crazy interaction with your mother. And this is how drawing a blank has a direct connection with writing. It also proved I should be calling my mother more often so I don’t get laughed at again.

In any case, I took the hint to heart and will be increasing my writing time every day. More writing, less talking means more entertaining content for everybody, including myself. As the old saying goes, practice makes perfect.

Do you have any skills you maintain through regular practice? Share your own experience with keeping or losing one.